“Stick at it!” “Don’t give up!” “If at first you don’t succeed, try and try again!” While dogged persistence is generally a trait to be admired, there are times when bowing out is a far better option. Not to mention a whole lot more fun.

A couple of memorable moments from my career are times when I’ve thrown in the towel and turned my back on what might be described as ‘perfectly good jobs’.

My now wife and I had moved interstate for jobs that sounded great on the surface, but ultimately made us miserable. After a year of whinging, and watching Sigrid Thornton on Sea Change on Sunday nights, we decided that enough was enough and drafted the resignation letters.

It wasn’t quite the classic take-that-job-and-stick-it scenario, but I vividly remember the feeling of freedom and elation as we packed up the purple Ford Festiva and hit the Great Ocean Road with nowhere to be, no timeframes, no employment and no permanent address.

A few years later, after I’d just started my copywriting business, I was excited to have been offered an ideal web copywriting job – a global car brand with potential for ongoing work. But there was a catch. It was late December and they needed a large site live by early January. This would have meant working through the Christmas break and during a planned family holiday. After initially feeling like I would be a fool to turn down such a great opportunity, I slept on it and made the rash decision to just say no.

The relief was instant, and it was the very first time I realised the blissful freedom and control that can really only come from working for yourself.

I first heard this idea from a veteran ad man who, sick of dealing with unreasonable people, decided that he would never again work with anyone he didn’t like. The result, he said, was more enjoyable and more profitable work. I’ve since tried to apply this rule wherever possible. Life’s too short to try and please energy sappers. Just say no.

When it comes to partnerships, relationships, clients and jobs, a long-term approach is by and large the way to go. But don’t forget that not everything can be fixed and not everything is worth fixing. Sometimes you’ve just got to bite the bullet and walk away.

As the long-suffering women in Paul Kelly’s classic song “To her door” says to her drop-kick partner, “Shove it, Jack, I’m walking out the #$%@ing door.”

Do you have any satisfying resignation or quitting stories? We’d love to hear them.

Read 13 comments or add your own at Flying Solo 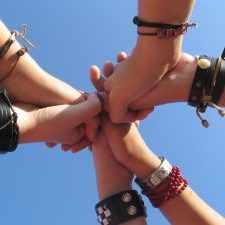