Embrace the chaos? Or fight for control?

I expend a lot of energy trying to create order and calm – to-do lists, project plans and research. The reality is that any sense of order rarely lasts, and it’s getting worse.

Despite dutifully updating my action list and the best intentions to stay focused, I find that only half of any day’s activity relates to the list.

As for trying to see further ahead, I’ve found despite carefully updated monthly budgets, it seems the year just gone bears little resemblance to the year pictured in the forecasts. Not worse, just very different.

And predicting the future of an industry? No chance. But not to worry, I’m convinced the boardrooms of Australia’s top companies are full of leaders who don’t really know where it’s all heading either.

A great article in Fast Company called Generation Fluxforcefully argues that “Modern business is pure chaos. But those who adapt will succeed.” And that “In an increasingly turbulent and interconnected world, ambiguity is rising to unprecedented levels.”

But for most, embracing change doesn’t come naturally. Here’s why, according to the article:

“From classrooms arranged in rows of seats… the assembly line and the way we promote executives, we have been trained to expect an orderly life.” And that, “Few traditional career tactics train us for an era where the most important skill is the ability to acquire new skills.”

There seem to be two opposing options for tackling the wild seas ahead:

For me, I’ll stick at the to-do lists and planning, but will stop being surprised or frustrated when they are turned on their head every 24 hours.

Are you, like me, becoming resigned to the exciting yet nerve-wracking chaos and the dizzying rate of change? Or, are you perhaps feeling calm, in control and on top of it all? I’d still like to think it’s possible!

Throw me a lifeline in the comments.

Read 18 comments or add your own at Flying Solo 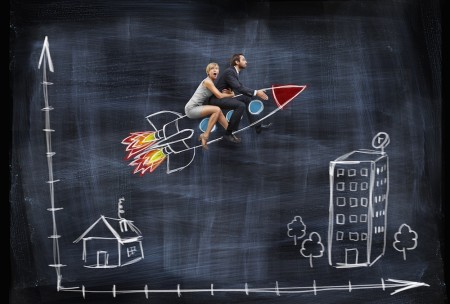